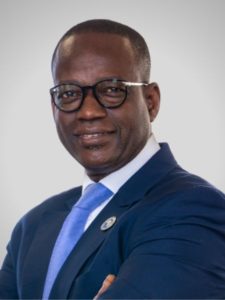 Mr. Lacina Kone, is the Director General and Chief Executive Officer of Smart Africa having joined the organisation in March 2019.

He oversees the process of defining and advancing Africa’s digital agenda and has overseen the development of continental blueprints for Africa on Digital Identity, ICT Start-ups and Innovation Ecosystems, Smart Villages and the definition of Africa’s Smart Broadband 2025 Strategy in addition to advancing additional key continental initiatives. In recognition for this work, Mr. Koné has been recognized in 2021 as 12th among the 50 personalities advancing Africa’s digital transformation.

Prior to that, Mr. Koné was the advisor to the Prime Minister of the Republic of Côte d’Ivoire (2017-2018), in charge of Digital Transformation and Public Reforms, and was also the advisor to the President from 2011-2017. Mr. Kone is a professional of ICT industry with over 25 years’ experience in the telecommunications, satellite and intelligent transport system. Prior to that, Mr. Koné held during his career several high level technical and managerial positions with prestigious firms such as Booz Allen Hamilton and Intelsat.

Mr. Kone is a graduate of three continents. United Arab Emirates, he obtained a bachelor’s degree in electronic engineering, in the UK, it has validated its Polytechnique rank at the University of Brunel, and the United States, his MBA from George Washington University.

Universal connectivity enables us to give access to better health options, basic education and social services to the poor. It is a means of empowerment for entrepreneurs and innovators who we see rise more and more from underprivileged communities.