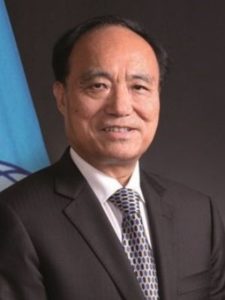 Mr Houlin Zhao was elected 19th Secretary-General of the International Telecommunication Union, the specialized agency of the United Nations responsible for information and communication technologies (ICTs), on 23 October 2014, and took office on 1 January 2015.

Born in 1950 in Jiangsu, China, Mr Zhao graduated from Nanjing University of Posts and Telecommunications, and holds an MSc in Telematics from the University of Essex in the UK.

From 1999 to 2006, he served as Director of ITU’s Telecommunication Standardization Bureau (TSB). During his term of office he spearheaded the introduction of new efficiency measures to improve ITU’s standards-making environment and strengthen its promotion. He also enhanced the strategic partnership between Member States and Sector Members, while initiating and maintaining good relationships with industry members.

From 1986 to 1992, Mr Zhao was a senior staff member in the then CCITT, and from 1993-1998 in TSB. Among his responsibilities as Counsellor for ITU-T Study Groups, he was Coordinator for cooperation with other international technical bodies, including ISO and IEC.

Prior to joining ITU, Mr Zhao served as an engineer in the Designing Institute of the Ministry of Posts and Telecommunications of China, taking an active role in his country’s expert meetings on telecommunication standards and national plans, as well as participating in ITU’s technical Study Group meetings as a Chinese delegate.

Mr Zhao is married with one son and two grandchildren, and is fluent in three official ITU languages: English, French and Chinese.

Broadband networks offer perhaps the greatest opportunity we have ever had to make rapid and solid advances in global social and economic development – across all sectors, including healthcare, education, new job opportunities, transportation, agriculture, trade and government services. In the twenty-first century, broadband networks therefore need to be considered as basic critical infrastructure, like roads, railways, water and power networks. One of the key roles of the Broadband Commission for Digital Development is to raise awareness of the critical role to be played by broadband over the next decade, and to ensure that broadband is at the top of the global political and economic agenda, in order to fully leverage the tremendous benefits available.