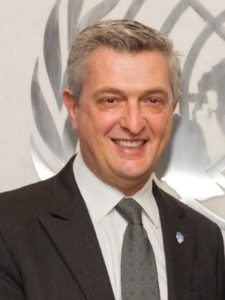 Filippo Grandi became the 11th United Nations High Commissioner for Refugees on 1 January 2016. He was elected by the UN General Assembly to serve a five-year term, until 31 December 2020.

As High Commissioner, he heads one of the world’s largest humanitarian organizations. UNHCR has twice won the Nobel Peace Prize.  Its 16,000-strong workforce spans 134 countries providing protection and assistance to around 71 million refugees, returnees, internally displaced people and stateless persons. Some 90 per cent of UNHCR staff work in the field, often in difficult and dangerous duty stations. The organization’s needs-based budget for 2020 is US$8.7 billion.

Before being elected High Commissioner, Grandi had been engaged in international cooperation for over 30 years, focusing on refugee and humanitarian work. He served as Commissioner-General of the UN Agency for Palestine refugees, UNRWA, from 2010 to 2014, after having been the organization’s Deputy Commissioner-General since 2005. Prior to that, Grandi served as Deputy Special Representative of the UN Secretary-General in Afghanistan, following a long career first with NGOs and later with UNHCR in Africa, Asia, the Middle East and at the organization’s Geneva headquarters.

Grandi was born in Milan in 1957. He holds a degree in modern history from the State University in Milan, a BA in Philosophy from the Gregorian University in Rome, as well as an honorary doctorate from the University of Coventry.