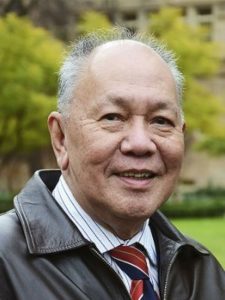 He was President and now Distinguished Honorary Fellow of the Institution of Engineers Malaysia; Chairman and now Honorary President of Commonwealth Engineers Council (CEC); President of the World Federation of Engineering Organisations (WFEO) 2003-2005; He represented WFEO as Co-chair of the “International Science and Technology Community” Major Group of UN Commission on Sustainable Development 2000-2006 and attended UN World Summit on Sustainable Development Johannesburg 2002 and World Summit on Information Societies Tunis 2005. He was Co-chair of Task Force “Science, Technology and Innovation” of the United Nations Millennium Project 2002-2005;  Senior Advisor UN Global Alliance of ICT for Development (GAID) 2006-2010; former Member of the Board of Trustees of Engineers Against Poverty, U.K; Member of the International Commission for Education for Sustainable Development Practice, Earth Institute, Columbia University 2006-2008; former Member of International Advisory Board of Grand Challenges Canada and former Member of the National Economic and Social Council Kenya.

He served with the National Electricity Board, 1961-1979. He was project director of the real time computer controlled National Load Despatch Centre project. He then founded and was CEO of Tenaga Ewbank Preece and later KTA Tenaga 1980-2002. He became a Partner of Ewbank Preece Consulting Group, UK; He was a Board Director of UMW Holdings Berhad 2000-2008; and a Commissioner of the Energy Commission of Malaysia 2005-2009;

He is founding Secretary General and Senior Fellow of the Academy of Sciences Malaysia;  the founder President of the ASEAN Academy of Engineering and Technology; Foreign Fellow of the Australian Academy of Technological Sciences and Engineering; and a Corresponding Member of the Pan-American Academy of Engineering. He served as a founding Board member of the InterAcademy Council (IAC) of the world’s scientific academies 2001-2004. He served as Special Advisor to IAC Co-Chair on Sustainable Energy 2008-2009 and Advisor to the Minister of Science, Technology and Innovation Malaysia 2006-2007.

He was awarded the UN Office for South-South Cooperation 2014 Triangular Visionary Leadership Award; the Jiang YoungSil Grand International Science and Culture Prize, Korea; the Malaysian State Awards of DPMP and KMN for services to engineering and the Honorary Officer in the Order of Australia (AO).